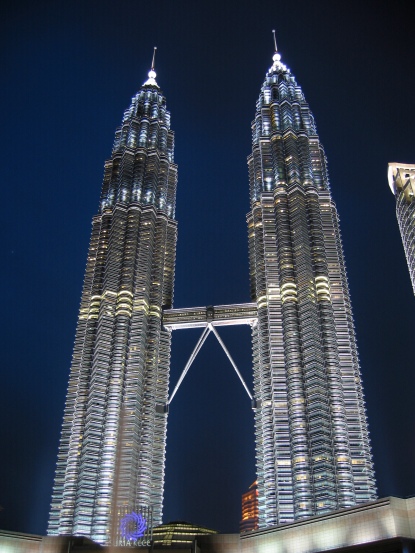 My, what tall towers you have!

Plate of food: Laksa – a noodle soup with flavours of coconut, curry, lemongrass and ginger. You can find Laksa everywhere in Malaysia from trendy restaurants to street vendors. The delight, for me, was that there were so many variations of this soup. Depending on my mood I could have it with shrimp, bean sprouts, lots of chilli, tofu, not much chilli, chicken, carrots, mushrooms and on and on. No matter what I chose I was always presented with a visually pleasing, heaped bowlful of steaming soup. The fragrance that wafts up from it is nothing less than intoxicating. As you eat it, the chilli warms your throat and belly, while the lime and tamarind refresh and excite your mouth. When was the last time a spoonful of food did that for you?

I am not going to pretend to be hardcore and tell you that I found the best Laksa joint in a back alley of KL somewhere. Truth be told, I enjoyed Laksa in a food court…in a mall…at the base of the famous Petronas Towers. Can’t get more mainstream than that. What can I say – it was air-conditioned. In KL, air conditioning becomes a necessity, like breathing or checking People.com for celebrity gossip. (Who? Me?) The irony, of course, is that I ordered a hot, spicy soup to enjoy in my refreshing air-conditioned environment. I can’t explain the logic, it is just the appeal of Laksa.

The best: Batu Caves, just north of Kuala Lumpur, is the site of an important Hindu temple. Inside 3 naturally formed caves, there are beautiful shrines to various Hindu gods. To reach the main cave you must climb 272 steps past seemingly harmless monkeys (they will cheekily avail you of any food you have on you, though). 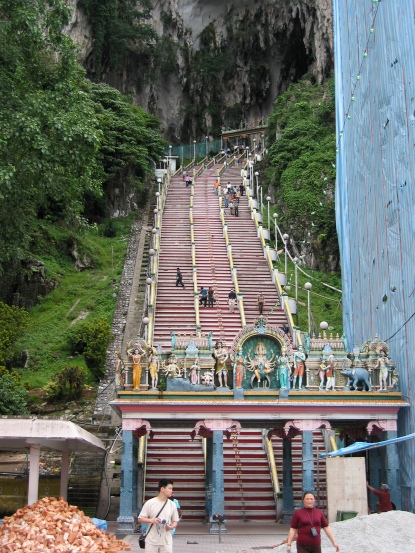 Once you have sweated off half of your body weight and reached the top, you enter the Temple Cave. The air is dank and filled with whispered prayers of devotees. Above you, through a tangle of vines and moss is a patch of blue sky in stark contrast to the dark, dripping interior of the cave.

The Art Gallery Cave at the base of the steps contains wild, technicolour statues and displays. I found myself squinting in the glare of such vivid colours. It was so foreign to me, being more familiar with sedate, solemn church interiors. These displays struck me as a celebration, as joyful and pleasing.

Bright colours in the caves

Story that needs to be told: After having exhausted all possible angles for photographs at the base of the Petronas Towers, on the skybridge 41 floors up, and from vantage points in the park surrounding the towers; we decided we needed to get some distance from them to really capture their dominating size.

We took the light rail transit out to a station that offered us a better view. The area was just outside of the CBD of the city. Gone were the shiny, modern skyscrapers and in their place were dismal, concrete apartment buildings. These identical blocks were maybe 15 stories high, and squeezed in tight next to each other. Tumbling out of each window were bright bits of laundry, hanging limp in the muggy air; satellite dishes precariously bolted to the wall; and people leaning out into the evening, looking hot and tired.

We walked a short way to the next station along the crumbling sidewalk at the base of one of these buildings. In the dusky light, I saw something move at the edge of the grass. I thought it was a dog at first, but I squinted and the shock of recognition made me stop in my tracks.

It was a rat. A BIG rat. One you could have saddled and ridden in a rodeo, if you were so inclined. (I, personally, would pay money to watch that.)

It paused and looked at us, then continued its lumbering trek across the sidewalk towards the building. I shuddered and my buttocks clenched (don’t pretend that doesn’t happen to you, too).

As we zoomed back on the railway to the clean and tidy area around the towers, I felt uneasy. The people living in those apartment blocks look out their windows and see hundreds of identical windows staring back at them. They look out and see rats big enough to need their own postcode. They look out and see the beacon of the twin towers, glowing on the horizon. It just reminded me how so often places have dual personalities: one for the privileged visitors and one for the people residing there. I felt lucky for where I lived and how I lived, and lucky to be a visitor.

I hope you look out your window and like what you see. I hope you give thanks for the way you get to live. I hope you last the 8 seconds on that rat in the rodeo.

“To travel is to discover that everyone is wrong about other countries.” Aldous Huxley