Quick! What pops into your head when I say “Colombia”? 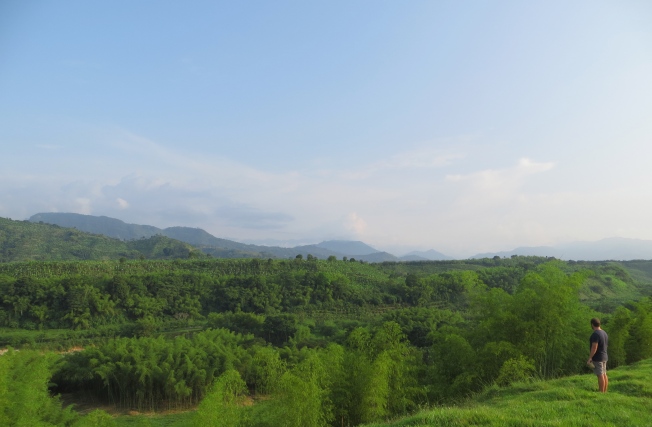 Okay, now try to think of something else about Colombia besides coffee and, you know, drug cartels…. Stumped? So was I until I visited Colombia, and holy moly, if that isn’t the most misrepresented country in South America!

For starters, Colombia has some scenery that will knock your poncho off: pale green pineapple fields, rows of banana trees propped up with bamboo poles, towering cacti, and rivers meandering through lush valleys. Add to that some killer empanadas and local people who never hesitate with a smile, and you have yourself a surprisingly great place for a holiday. 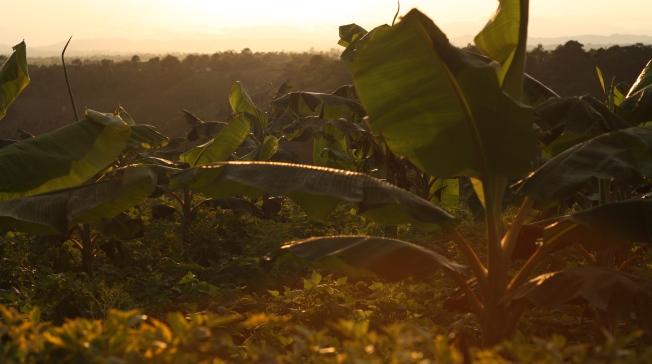 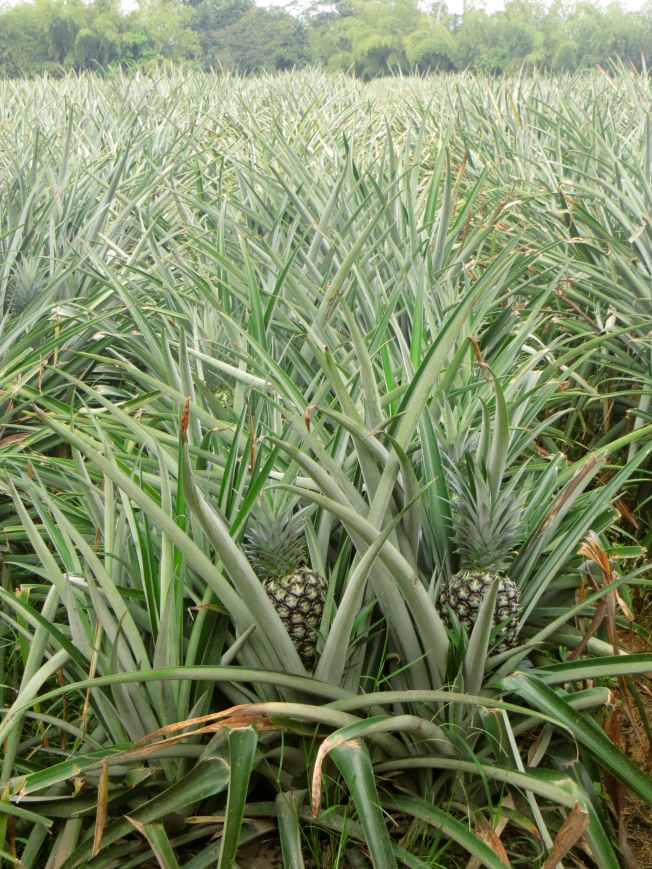 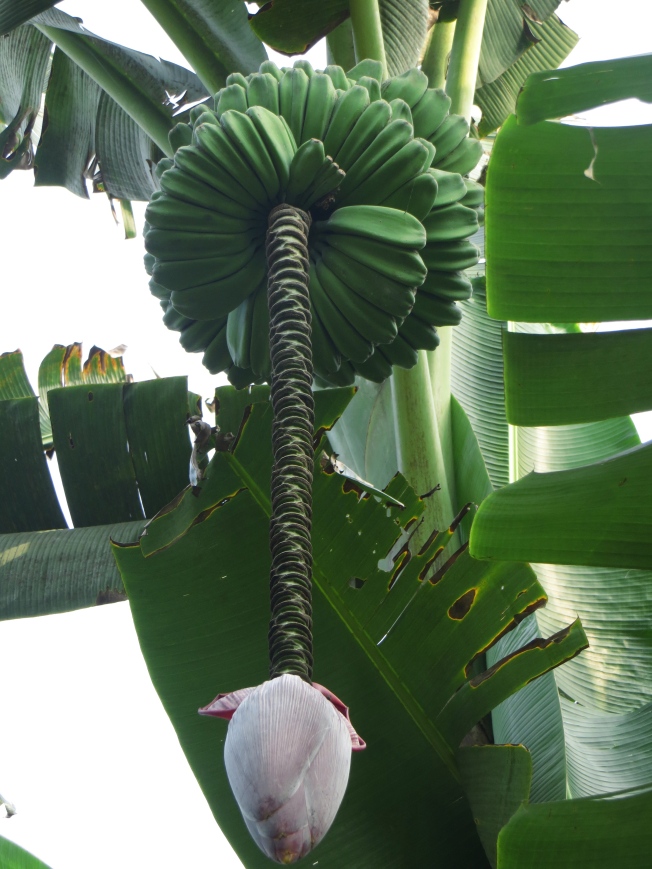 We traveled with friends, one of whom is Colombian, and that no doubt helped us get the very best first impression of the country. During our two week stay, we spent one week in the coffee zone – a 9.5 hour (ahem!) drive west from Bogota. (Around 5.5 hours, the alternative of air travel starts to look real good.) 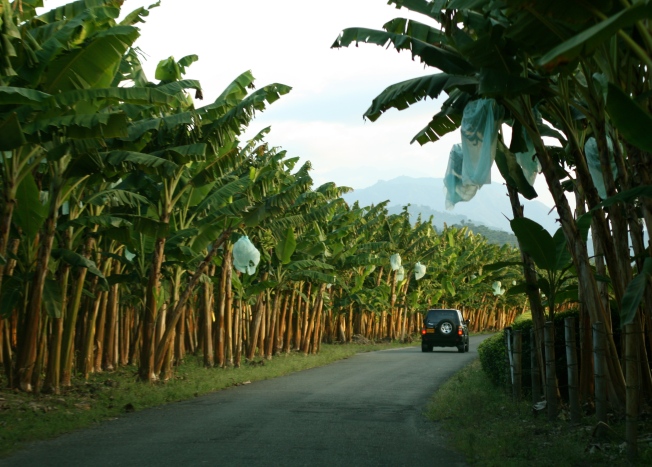 But, get this, it is worth the journey! The route took us up and over mountains, through eucalyptus forests, past tiny homes clinging to the steep hillsides, and under palm leaves the size of surfboards. We stopped often to stretch little legs (and big legs!) and, more importantly, to drink coffee, fresh juices, and nibble on hot empanadas sprinkled with a squeeze of lime. Roadside vendors often looked like little more than a shack with a couple of plastic chairs in the dust out front, but they cranked out some awesome food. You just can’t over think it. 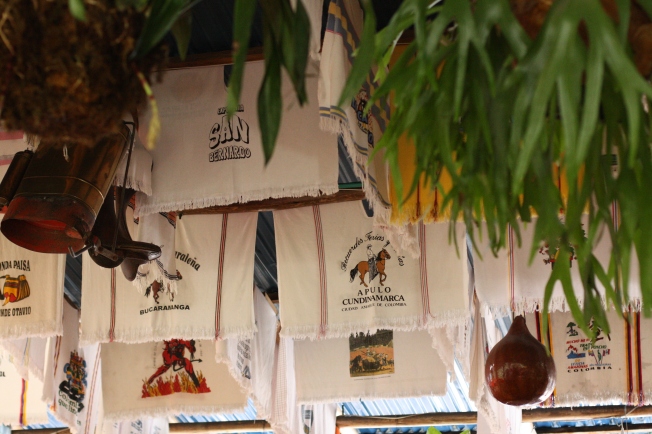 Ponchos hanging from the rafters of a cafe. 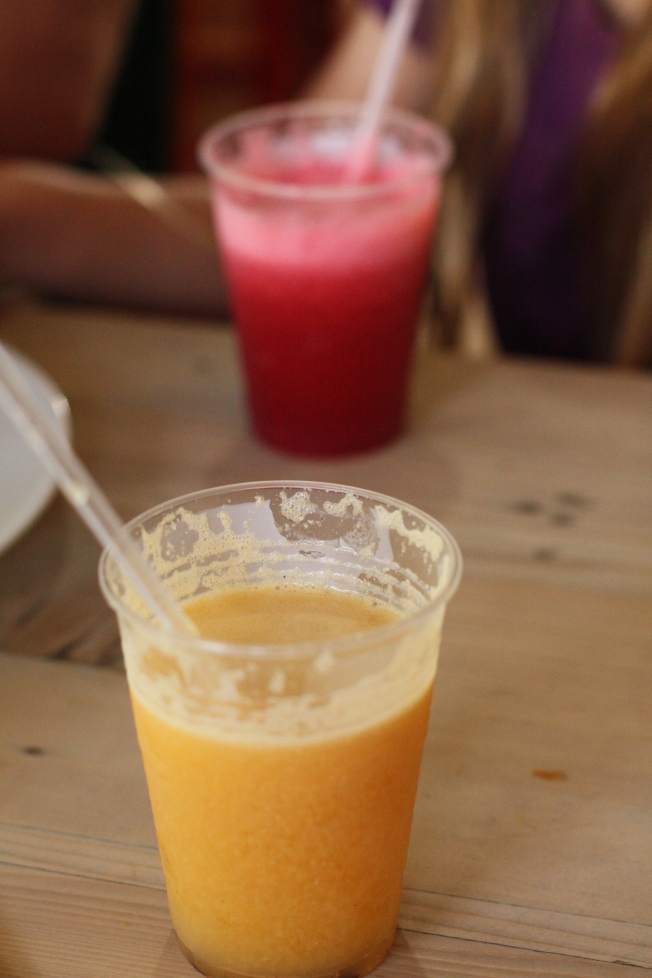 We ate lunch at one of these dubious looking establishments where the “chef” was tending to various cuts of meat over a roaring fire, stopping occasionally to wield an axe and chop more firewood. Fresh lemonade blissfully quenched our thirst as we sat sweating next to the fire, waiting for our meal. When it came, we tucked into tender pieces of salty meat with floury yucca (a starchy tuber also known as cassava) and creamy crescents of avocado on the side. Much better than any boxed sandwich I would normally grab from a petrol station on the highway. 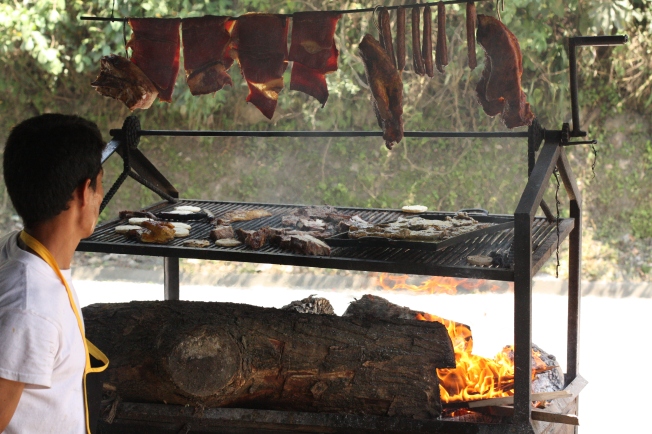 We stayed at a farm up on a hill in one of the valleys. At the bottom of the hill was a wide, shallow river and groves of tall bamboo. Peacocks wandered around the farm’s property, rattling their tail feathers at each other (and being startlingly loud at inconvenient hours, truth be told). 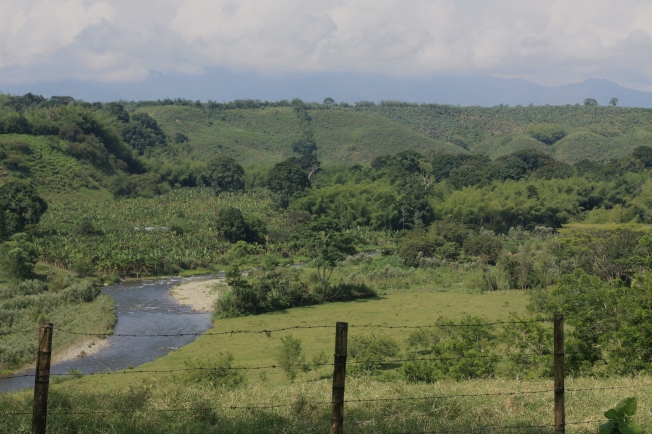 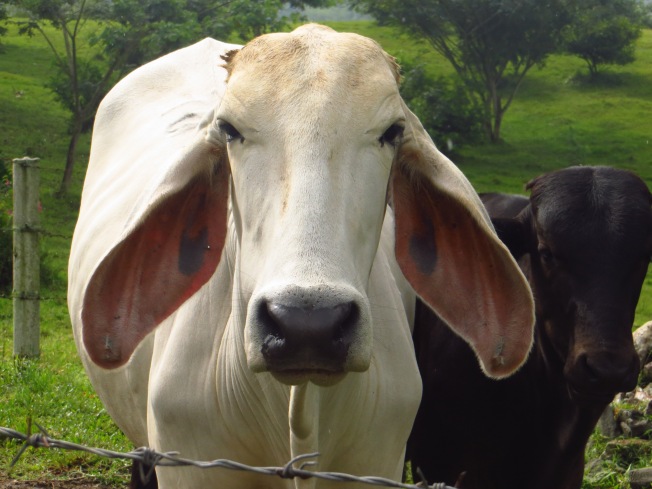 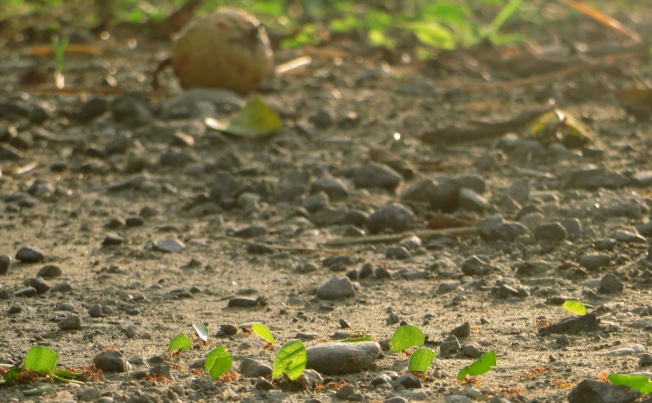 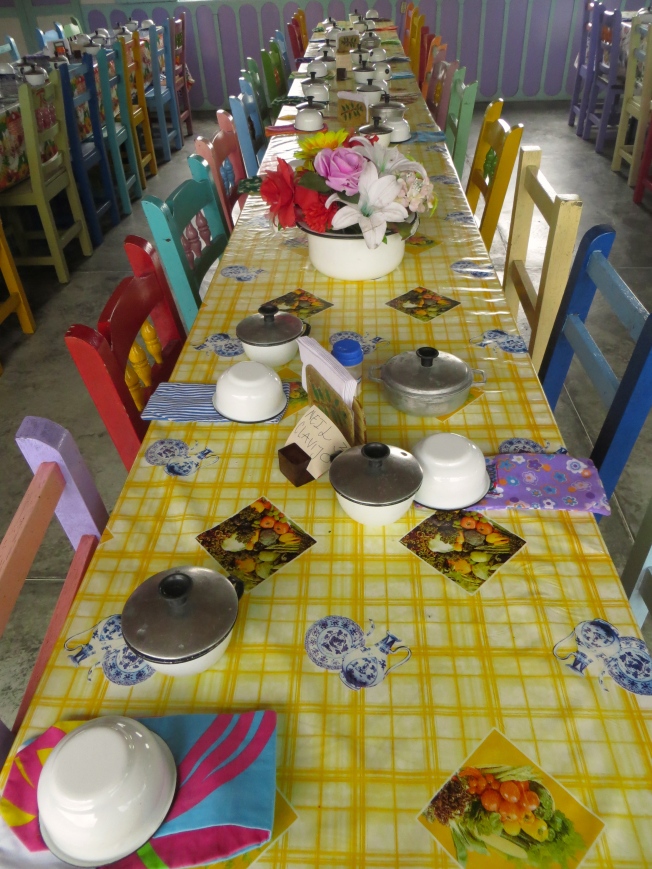 Our days started with coffee and arepas which are addictively delicious corn pancakes. They are fried until golden and eaten with butter, salt, and chili sauce. You can add an egg, avocado, cheese, or even crispy fried plantain on top, but I liked mine simple and spicy.

We explored the local area during the days with trips to coffee plantations, petting zoos, and even a coffee theme park. It was fascinating, but the times that secured Colombia a place in our hearts were the evenings at the farm with a barbecue, bottles of wine, sleepy children, three languages around the table, and frogs starting their nighttime chorus. 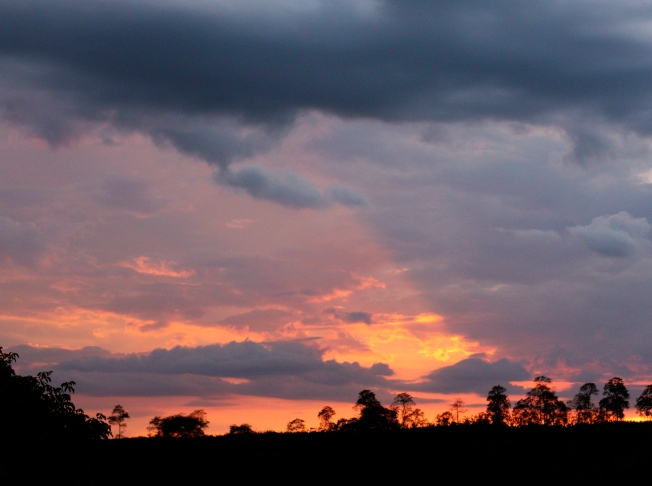 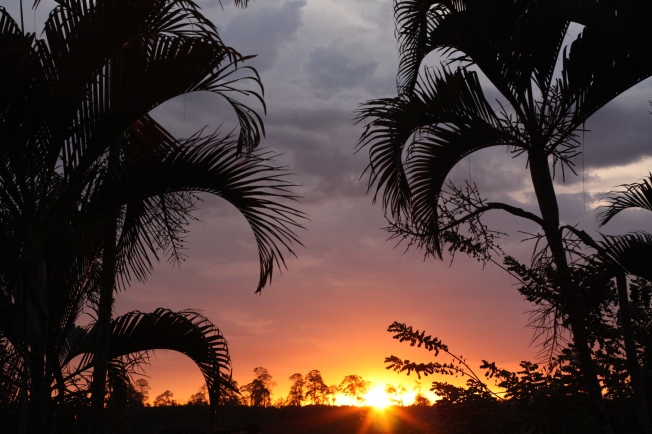 and everybody doesn’t want to live here.” 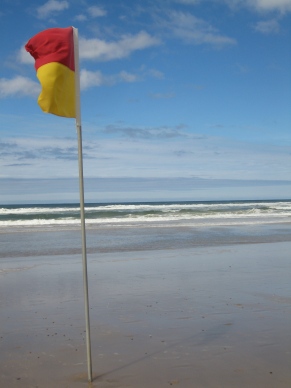 This flag means that there are approximately 35 things in the water that can kill or maim you...or maybe I am making that up.

Plate of food: The morning we arrived we plunked ourselves down for a snack which swiftly turned into full-blown brunch when I saw the following menu item: Zucchini and Sweetcorn pancakes with bacon, asparagus and Hollandaise sauce.

There are certain foods that cause me to stop in my tracks and look no further on a menu. Bacon, asparagus and Hollandaise sauce are all menu-stoppers (so is pork belly…or rhubarb…or truffles…or salt & pepper squid – you get the idea). It was a culinary holy trinity.

The pancakes were golden and savoury, stacked high with slices of back bacon between them. The asparagus spears were balanced on top, perfectly cooked and vibrant green. The sauce was velvety and rich. I ate in complete rapture, not even disturbed by my son pouring salt on his blackberries. You’re 2! Throw caution and your blood pressure to the wind, my boy!

To elevate this meal to yet another level, I drank 2 large flat whites, which is the Antipodean way of saying milky coffees. Happiness on a plate. Happiness in a cup. This meal made me smile. And gain 3 lbs, but who cares?

The best: My, but this country has some fine beaches! It’s no surprise that an area known as Surfer’s Paradise, Gold Coast, Sunshine State, etc is going to have stunning beaches, but WOW! We stayed a few steps away from a beach that was clean, pristine, and so beautiful. 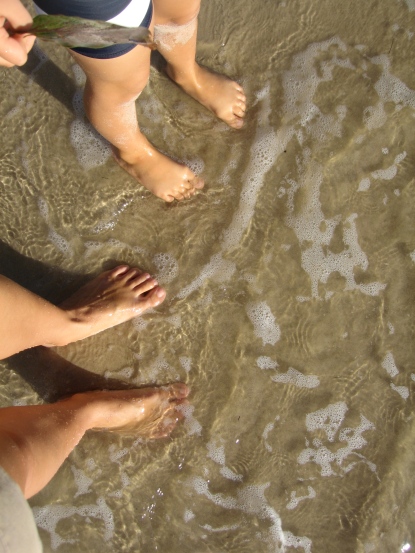 The water varied from bright blue to bottle green and formed perfect white waves that curled and crashed as if offering a tutorial to all the world’s waves on how to be outstanding. The sand was white and fine; it squeaked as you shuffled your feet. It was dotted with smooth, dark, round pebbles and shells that ranged from dusky pink to deep purple. The skilled lifesavers jogged in groups along the beach while I tried to distance myself from my mania: my daughter obsessively collecting every blessed shell on the beach and my son shouting at the waves “IT”S A BIG ONE”. Huh? What kids?

In one direction was a headland that loomed over a collection of cafes that could fulfill my need for flat whites/good food. In the other direction was the pretty skyline of downtown Brisbane which I imagined as a ghost town because surely no one works when there is a beach nearby like this one. 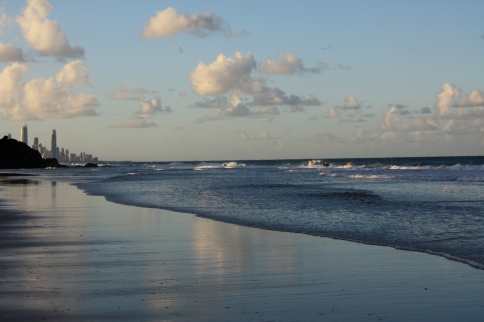 Brisbane beckons in the distance, but I'm not going anywhere!

For all this loveliness, it must be said that it is my belief that you will die if you swim in Australian waters (please refer to sharks, jellyfish, poisonous fish, sting rays, rip currents, and – for fresh water – crocodiles). My first trip to this fine country involved me pouring over a book that outlined all of the deadly things in the water and on land in Australia (bad idea to let me loose in that bookstore). I have decided that you can only truly be free from harm if you are in the air. So, I don’t swim. But I LOVE the beaches!

Story that needs to be told: Sometimes crappy things happen when you travel.

Someone came into our holiday apartment while we were asleep and stole our things. I KNOW! Take a moment.

It was the 4th night of our stay. Matt had gone to bed while I stayed up late checking emails and critical celebrity gossip. At some point I felt uneasy and locked the patio door which led out to the communal garden area of the apartment complex. The kids had slept from 2:30 p.m due to sheer exhaustion and were still asleep. I brushed my teeth and settled into bed at 12:08 a.m (gotta love digital clocks burning the exact time on your memory).

At 12:20 I was just drifting gently towards sleep when I heard the patio door open. I lay perfectly still and listened intently. All I could think was that it was IMPOSSIBLE that the door opened because I had locked it. Then I heard the pile of coins we had left on the kitchen counter clinking together. Everything came rushing together into one pinpoint of panic.

I shook Matt hard. Twice. Then I whispered, “There’s someone in here” which is something you only want to hear while watching a horror film.

Matt launched out of bed and went down the passageway where he saw someone at the door holding our laptop and our backpack. His still-asleep brain struggled to make sense of the scene. The guy was so dumb/drugged up/hearing impaired that Matt walked right up to him and grabbed his arm. The intruder turned and screamed in such an animalistic and frightened way that, for a brief moment as I sat in bed with my heart in my throat, I thought that maybe it could be just a curious Australian marsupial who…managed…to open…a door. Like I said, it was a BRIEF moment.

Then I found myself propelled into the passageway by fear and I screamed because it seemed like a good way to make an entrance. Poor Matt thought that I was in danger behind him so he turned and the guy ran off, jumped the fence, and was gone.

That pinpoint of panic then exploded and crashed around, barreling through my veins and around the room. Not pretty.

Luckily the goon had dropped our laptop and backpack at the door as he fled, but we quickly took note of the other things missing: Matt’s wallet, a lot of a loose cash, and my watch. We also took note of things that he had strangely left behind: an iPad sitting on the couch, Matt’s watch, Matt’s phone. Did I mention that he was dumb?

The next few hours were a blur of phone calls, police reports, cancelled credit cards, cups of tea and more tears.

After processing all of this over many days I have this to say:

All this to say that we had a terrible fright, but we are all fine and feeling thankful more than anything else. I have nothing against Australians in general, except for the mandatory hatred of the Wallabies rugby team based on my husband’s rugby affiliation.

I think the sad truth is that this kind of thing can happen anywhere. So be vigilant, be careful, but keep traveling, keep looking people in the eye, keep enjoying the adventure. Just don’t wear a hoody, okay?

“Stop worrying about the potholes in the road and enjoy the journey.” Barbara Hoffman 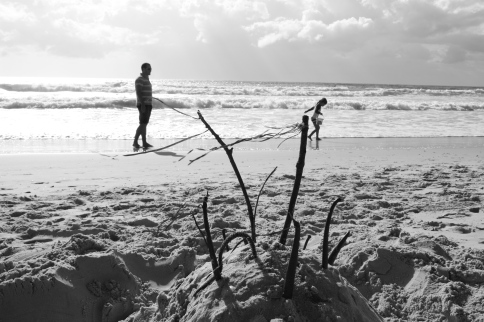 Who needs credit cards when this is out there?